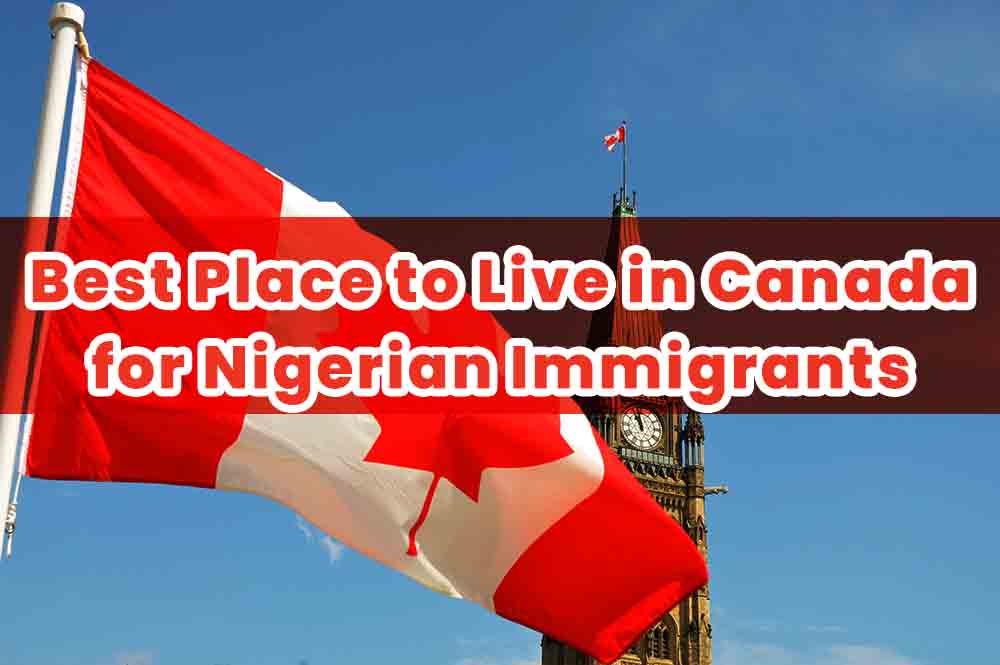 What is the best place to live in Canada for Nigerian immigrants is a question we are asked quite a bit. However, choosing where to begin can be intimidating because Canada is the second-largest country in the world. In addition, each of Canada’s three territories and ten provinces has a unique charm.

Following that, here are some of the best cities to consider if you’re considering moving to Canada.

Considering that a more significant proportion of Nigerians come to Canada in search of greener pastures, Ontario is undoubtedly an excellent place to consider settling down.

Ontario is the most populous and most significant city in Canada. Most new arrivals who indicated Ontario as their preferred province of residence anticipated relocating to Toronto. With more than 50% of its population being a member of a visible minority group, Toronto is one of the most urban and multicultural cities in the world.

Ottawa, the capital of Canada, is the second-most visited city in Ontario. The capital city of Canada provides both a high standard of living and an inexpensive cost of living. Without question, Ontario’s winters can be chilly. Wintertime lows of -40°C have been recorded in Ontario. However, with hot months reaching temperatures beyond 30°C, it will all be worthwhile once summer arrives.

A combination of resources, manufacturing know-how, and exports underpin Ontario’s robust economy, contributing 37% of the country’s GDP. In addition, nearly 50% of all workers in high-tech, financial services, and other knowledge-intensive businesses are also based in this province.

Ottawa boasts a cheaper cost of living than other Canadian cities, as well as economical housing and convenient transportation.

In addition to being one of the safest areas in Canada, it features some of the most affordable housing. Finally, given its top-notch educational facilities, Ottawa is among the most significant cities to continue your study.

Ottawa is the best place to live in Canada for Nigerian immigrants if you’re looking for a Canadian city where you can work while attending school.

History indicates that Saskatchewan annually receives more than 9,000 immigrants from more than 180 different countries, which makes it one of the best places to live in Canada for Nigerian immigrants.

Saskatchewan’s welcoming provincial nominee program, which is intended to make immigration simple for persons with expertise and talents that are in high demand, is what draws immigrants to the province.

For the past ten years, more people have moved to the city from other parts of the country than from leaving.

The province of Saskatchewan is renowned for paying generous salaries. The average weekly wage in Saskatchewan has been approximately $970 for the previous five years, ranking it third best in the nation.

The median pay has been rising consistently over time is another benefit.

Some Nigerians desire to immigrate to Canada to continue their education. Quebec is the finest place to relocate to if that is the case.

Some of the most prestigious universities, including Concordia University, McGill University, HEC Montreal, and others, are located in the city.

Quebec, Canada’s largest province, is renowned for the French language, its abundance of culture, and maple syrup. Although English is the majority language in Quebec, the provincial government offers services and safeguards its citizens. Therefore, it is an excellent idea to learn French even if it is possible to navigate Quebec without it. Fortunately, Quebec provides no-cost French language classes to recent immigrants.

The most populated city in Quebec is Montreal, which ranks third among new immigrants’ favourite cities. Montreal is frequently regarded as Canada’s most cultural city; you can take advantage of numerous comedies, reputable music, and film festivals year-round. The most popular host city for events outside of North America in Montreal.

Quebec City is the second-most preferred location in the province for Nigerians to relocate. This unique French-speaking city exhibits a harmony of the past, present, culture, and environment. In addition, Quebec City offers a variety of unusual winter activities and attractions, such as the famous Winter Carnival, going tobogganing through the middle of the city, or going to the Hotel de Glace, so residents don’t stay indoors during the chilly months (Ice Hotel).

Quebec’s weather is known for its extremes. While summertime temperatures in some sections of the province can reach as high as 35°C, wintertime lows can get as low as -40°C.

and food and nutrition (F&N)

Vancouver frequently receives top rankings for the most livable cities world this is because thee. The lower land of British Columbia is where it is situated.

Compared to the rest of Canada, the city experiences substantially milder weather during the summer and the winter.

Generally speaking, winters are mild, and summers are hot, with snowfall being more common in the mountains where winter activities are possible.

Excellent public transportation makes getting around quite simple, and most residents don’t need cars because it gets them where they need to go.

British Columbia’s most famous city is Vancouver. The views of the water and mountains are just stunning in Vancouver, a city in Canada’s Pacific area. In addition, Vancouver is a prominent filming destination for big-budget movies and boasts a robust art scene.

The second-most populous city in British Columbia is Victoria. British Columbia’s provincial capital is Victoria, located on the southernmost tip of Vancouver Island. Because of its laid-back atmosphere, charm, and unique geography, Victoria is the ideal city for any understated outdoor enthusiast.

British Columbia is the best province for you if you like moderate winters. The winters in British Columbia’s coastal regions are among the mildest in the nation, with few days below freezing. However, in contrast to the coast, British Columbia’s interior and central parts frequently have hotter summers and snowier winters.

In 2021, Alberta was the fourth-most famous province among immigrants. In addition, Western Canada’s Alberta is home to some of the nation’s most well-liked natural attractions. The Rocky Mountains, cattle farming, abundant natural gas and oil reserves, and Dinosaur Provincial Park, are all prominent features of Alberta.

Calgary and Edmonton are Canada’s fourth- and fifth-most popular cities for Nigerian immigrants.

Edmonton and Calgary are the two sunniest cities in the country, receiving more sunshine than any other city in Canada. The province of Alberta can experience winters with temperatures as low as -51 °C, yet the ample sunlight helps residents survive. Also, parts of the region enjoy temperatures as high as 35°C as the summer months go and temperatures climb dramatically.

Oil and gas production is Alberta’s primary industry, followed by forestry, agriculture, education, banking, tourism, and manufacturing sectors. As a result, Alberta is the finest province in Canada for Nigerian immigrants wishing to save money because it also has lower taxes than the rest of the country.

Nigerian immigrants have arrived in Canada in several ways, with employment and family sponsorship being the most common. An individual may apply to become a permanent resident of Canada through the programs that fall under these categories and a few others and start a fresh start!

Based on a few criteria, skilled workers moving to Canada may be qualified to apply for permanent residency through Express Entry. One may apply for this program through one of the following channels: the Federal Skilled Worker Program, the Federal Skilled Trades Program, the Canadian Experience Class, or a Provincial Nominee Program (PNP). These programs all have different specifications. Additionally, immigrants may apply for visas as business immigrants, investors, or entrepreneurs. Finding out one’s eligibility and which program is appropriate for them depends on speaking with an immigration expert.

Individuals who wish to come to Canada may sponsor family members who are citizens or permanent residents. Consequently, having a parent, grandparent, kid, or spouse in Canada may be advantageous for some people who want to immigrate. You may learn more about the family sponsorship pathway and get assistance determining your eligibility by speaking with an immigration consultant.

Canada is one of the world’s most sought-out nations for higher education. Over 150,000 international students come to Canada each year. In addition, many foreign nationals choose to learn in Canada. Numerous programs enable overseas students to work in Canada while they are studying. In addition, you might qualify for permanent residency once you graduate!

The need for immigration is growing as Canada’s population ages, and its fertility rate declines. Over the past years, Canada has received a record number of Nigerian immigrants. From the list of the best place to live in Canada for Nigerian immigrants, you can choose what attracts your attention and get there. The moment is to move to Canada because there are now higher immigration goals and more effective procedures.