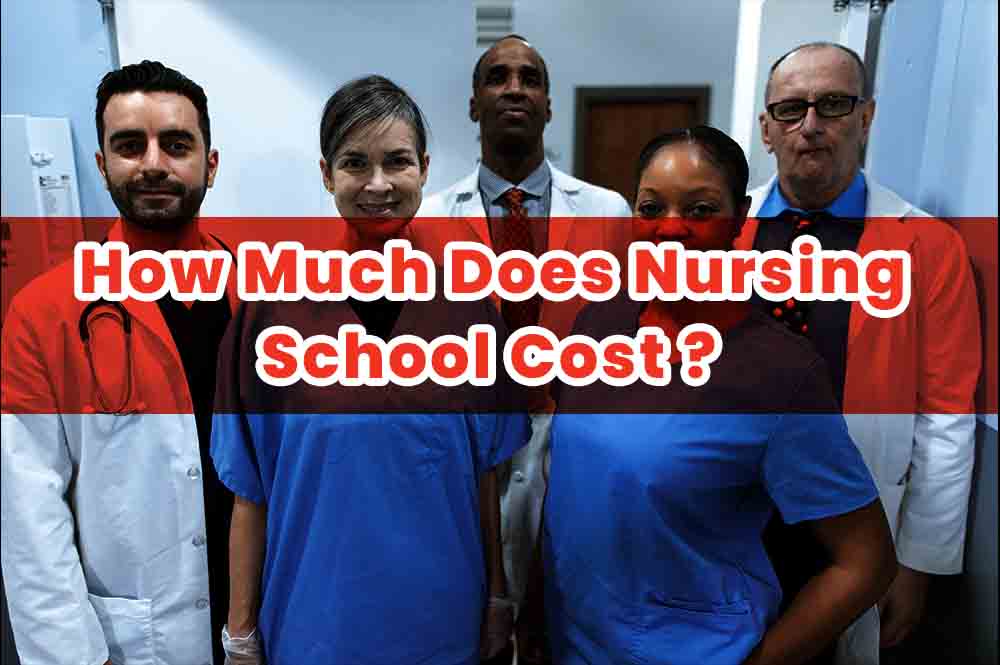 The answer to the inquiry “How much does nursing school cost?” isn’t always obvious. Tuition fees for nursing degrees vary substantially. But, for many ambitious nurses, the lucrative nature of the profession outweighs the exorbitant price of nursing school.

A median annual pay of $73,300 was made by registered nurses in 2019, based on the Bureau of Labor Statistics (BLS). However, advanced practice nurses earned a median salary of $115,800, even more. Additionally, nurses work in a field that is in high demand; according to BLS projections, employment in healthcare occupations might rise by 14% between 2018 and 28.

However, the cost of a degree might still be frightening. The total cost of tuition can range from $6,000 for an associate’s degree to more than $100,000 for a doctorate. So what does nursing school worth with such a wide range? This article investigates the answer to that query, considering the numerous variables that affect the broad range of nursing degree expenses.

What Is the Price of a Nursing Degree Program?

Associate degrees in nursing (ADN) are typically the most economical programs because they only last two years. Public universities’ tuition fees might range from $3,000 to $10,000 annually or from $6,000 to $20,000 for the entire degree.

Tuition at private universities is typically more expensive; there, students may spend up to $40,000 on an ADN. To offset costs, however, many ADN schools provide special rates for active-duty personnel and veterans, and students can seek scholarships.

ADN programs typically demand 60 credits of education, and universities break down tuition fees by credit. The price per credit for in-state programs can range from $100 to $200. Private and out-of-state tuition frequently costs up to $400 per credit.

Remember that there may be additional lab and administrative charges. In addition, you must account for room and board in your budget if you reside on campus. However, many ADN students commute to college from their homes.

The overall cost of tuition for a conventional four-year bachelor of science in nursing (BSN) program should be at least $40,000. However, the cost of education can be as high as $80,000 or even $100,000. Colleges and institutions charge per credit, and BSN degrees usually require 120 credits.

Despite this, some public schools provide more reasonable tuition, more chances for receiving scholarships, and other forms of financial aid, including reduced tuition fees for active-duty and retired military personnel. In addition, certain states have unique government-sponsored financial aid schemes for nursing students.

In addition to their tuition, nursing candidates must also pay for vaccines, lab insurance, technology fees, scrubs, and other expenses. Lodging and board costs must also be covered for those who reside on campus.

Despite only lasting one to two years, tuition for master of science in nursing (MSN) programs is not always less than for a four-year bachelor’s degree. An MSN program might cost anywhere from $35,000 to $70,000. Some universities demand up to $100,000.

Credit expenses are a significant factor in why costs vary so drastically. Although, at the same time, in-state public university tuition tends to remain affordable, private and out-of-state public education can run students a significant financial burden. Additionally, each program has a different minimum credit requirement.

Depending on their area of concentration, students may be required to finish anywhere between 30 and 60 courses. One credit at certain elite private schools can cost around $2,000.00. The total cost of tuition for a degree with 50 necessary instruction credits can exceed $100,000.

The educational background of each prospective student has a significant role in determining the overall tuition costs. For example, a master’s degree holder typically has to finish 35-50 credits over 2-3 years. As a result, these programs usually remain on the cheaper end of the price spectrum.

However, those who enrol in BSN-to-DNP programs may need to finish 60 to 80 courses, which they can typically complete in 3-5 years. As a result, tuition costs for students who want to attend these programs will likely increase. In addition, by speciality, the necessary credits may also differ.

For students conducting independent research, doctoral schools may provide financial aid. These fellowships or assistantships may sometimes pay for the entire cost of tuition, and some institutions may also offer a living stipend.

How Tuition Prices Can Differ

The cost of attending nursing school varies depending on the institution type, location, and format. For example, on-campus and online program costs might differ, a student’s in-state or out-of-state status affects tuition, and private nursing schools often charge more than public universities.

Cost of On-Campus vs Online Programs

Online programs typically have lower operational costs than on-campus ones for schools and universities. As a result, tuition costs for remote learning degrees generally are lower than those for traditional, on-campus degrees. In addition, students who study online can also cut back on other indirect expenses like childcare and transportation. Some online courses do, however, tack on a distance learning fee.

Costs of In-State vs Out-of-State Programs

Frequently, public schools charge two special tuition prices for local and out-of-state students: one for students who live in the state. Non-residents typically pay more—sometimes even twice as much—than residents.

For instance, Missouri State University estimates that out-of-state students could pay over $63,000 in tuition, compared to in-state students who pay roughly $28,000 overall. In addition, several community institutions charge considerably less tuition for students who live in the county.

Keep this disparity in mind when looking into public schools outside of your state. Additionally, find out if the institution or university provides unique financial aid or scholarships that allow non-residents to pay in-state tuition. Some colleges might take part in agreements on tuition reciprocity with nearby states.

Even though it’s not a strict law, private institutions typically charge more than public ones. This is because the state government provides funding to public higher education institutions, so students don’t have to spend as much on tuition.

At public universities, degree seekers can often expect to spend $500 per credit or less, depending on the sort of program; graduate students might pay more. For example, nursing students at private colleges may be charged up to $1500 or even $2000 per credit.

A more expensive education may not always be of higher quality. For example, many public school programs offer top-tier nursing programs. Students might pick these programs if they are awarded scholarships or decide that the education and networking opportunities will be worthwhile in the long run, even though private colleges typically have higher expenses.

Students should account for other costs, such as those for supplies, books, and transportation, in addition to the tuition for nursing school.

Textbooks typically cost at least a few hundred dollars per semester, but over two to four years, they can cost thousands of dollars. Additionally, students should spend money on their nursing attire and supplies. Clothes can cost about $200, and stethoscopes and lab supplies may cost $300 to $500. Candidates for degrees should also consider the $200 NCLEX exam fee and background checks required for licensure applications.

Those pursuing degrees could find that their daily expenses have increased. For example, they must consider the cost of getting to class, which may include the cost of gas, tolls on the road, or public transportation. Even students enrolled in online programs might need to arrange transportation to their clinical locations.

Room and board, as well as meal plans, must be paid for by students who live on campus. Students with families may need to consider childcare options in class, such as daycare or babysitting. Location can have a significant impact on these daily prices.

Although nursing positions sometimes provide above-average incomes, many ambitious nursing professionals are hesitant to begin their degrees due to the expensive cost of nursing school. According to a 2017 American Association of Colleges of Nursing poll, about 70% of degree applicants take out loans at the graduate level (AACN). In addition, survey participants reported that they had accrued student loan debt between $40,000 and $55,000.

There are many ways for students to get financial aid for nursing school. Colleges and universities frequently provide institution-specific scholarships. In addition, professional associations, hospitals, and nonprofit organizations offer scholarships to students. Along with this source, you may locate a collection of nursing grants and scholarships here.

Several ADN and BSN programs, like specific graduate programs, provide reduced tuition fees for active-duty or retired military personnel. Students can also seek government funding. In addition, graduates who agree to work in locations with a great need for healthcare professionals may qualify for student loan forgiveness programs offered by the federal government and some state governments. More information on those programs can be found here.

Financing your nursing education could be a struggle, even though it is unquestionably a future investment that will more than pay for itself.

Depending on the institution you attend—such as a private university vs a community college—and the nursing degree you want to pursue, such as an Associate or Bachelor’s degree, the cost of nursing school can vary significantly.