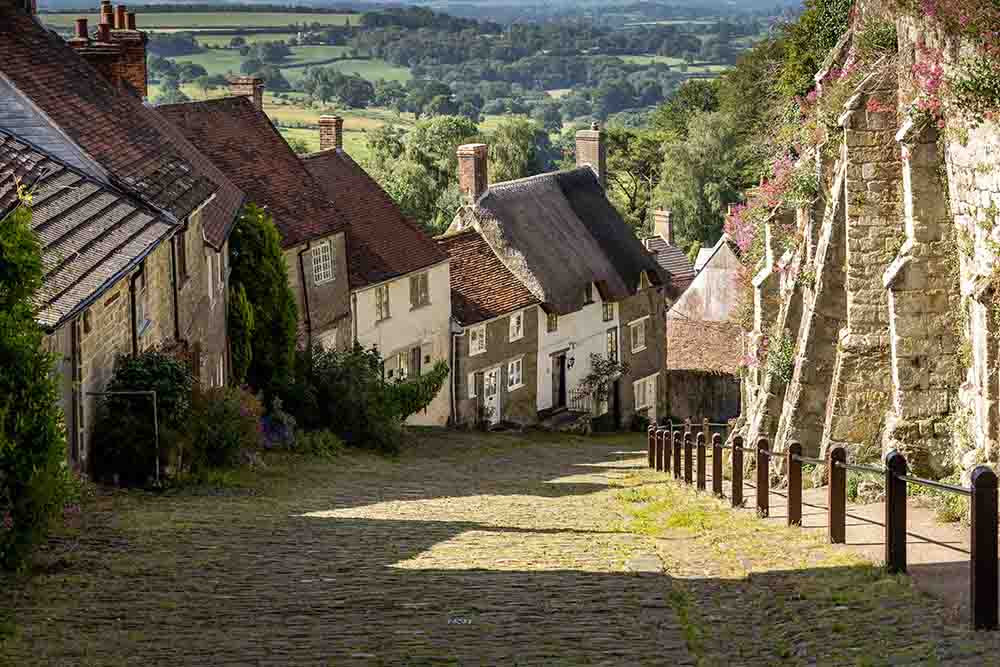 Durdle Door is one of Britain’s most iconic natural landmarks. The huge limestone arch that rises out of the sea is one of many such arches along this stretch of coastline – but it’s by far the most famous.

It’s perched on the edge of Lulworth Cove, and there are plenty of viewpoints if you want to see it from above. If you’re feeling adventurous and you have some spare time – visit Durdle Door at night and watch the sunset over the horizon.

Located towards the eastern end of Studland Bay, Studland Beach is popular with families thanks to its clean and safe swimming conditions – it’s even been awarded a Blue Flag rating! If you’re feeling adventurous, then you can hire everything from kayaks to windsurfers from the National Trust’s Activity Centre on Knoll Beach. This is a stunning place to visit while in Dorset.

Arne is a large area of heathland in Dorset with its own small lake called Middlebere Lake that lies next to Poole Harbour. There are many birds that can be seen including the Dartford warbler.

Arne also has many species of dragonfly and butterflies such as the silver-studded blue butterfly which can only be found on heather moors. The reserve is open to visitors at all times and is free to enter even though there are certain laws around it. It’s one of the best places for visitors to visit at any time.

Chesil Beach is a shingle beach that runs for 18 miles (29 km) along the coast of Dorset and East Devon. It starts at West Bay near Bridport and ends in Portland Harbour, where it joins the Portland Breakwater. Chesil Beach is part of the Jurassic Coast, also designated a World Heritage Site.

The beach is steeply sloping and covered with flint pebbles. Its height increases significantly towards the west until it reaches a maximum height of around 24 meters (79 ft) at Abbotsbury Swannery, from where it continues on to West Bay with a reduced slope of approximately 0.5 meters (1 ft 8 in). It’s definitely one of the best places to visit while in Dorset.

This is a friendly, dog-friendly site that’s perfect for families. The park has an indoor pool and several activities to keep the kids occupied, including a play area and football pitch.

It’s a quiet spot that’s only half a mile from the beach at Seatown – one of the most picturesque beaches in Dorset. It’s also close to the South West Coast Path and the Jurassic Coast so there’s plenty of walking and sightseeing to be done nearby.

Golden Cap is in an area of outstanding natural beauty, and it’s easy to see why. The park has direct access to the South West Coast Path, meaning you can go on some incredible walks.

Whether you want to go on a gentle stroll or something more challenging, Golden Cap Holiday Park is the perfect base for exploring this part of Dorset.

You can even do a circular walk that takes you past a secret smuggler’s beach!

The park has various types of accommodation to suit all budgets, including caravans and lodges. There’s also a swimming pool and plenty of entertainment at the clubhouse.

This fort is a fascinating museum, located on the Nothe Peninsula of Weymouth, Dorset, in southern England. It was built centuries ago and has been beautifully preserved.

The museum has a lot to offer with its interactive exhibits, children’s activities, and hands-on displays, which make it one of the best places to visit in Dorset. The fort also has an incredible view of the sea and the Jurassic Coast.

Lulworth Cove on the Dorset coast is a great place to stop when visiting the Jurassic Coast World Heritage Site in England. The cove was created by erosion from waves and sea, which has caused the seabed to rise, creating a circular shape.

Its surrounding cliffs have been formed by layers of rock being pushed up over millions of years, which can be seen on walks along the coast path. There’s also a museum and center here that has a lot of interesting information about geology.

It’s the one place in Dorset where you can imagine yourself living through a period of history. Standing dramatically on a hill by a gap in the Purbeck Hills, Corfe Castle is an atmospheric ruin.

It was attacked and destroyed during the English Civil War, leaving a shell of a castle that has been left as it was found after the battle.

The village next to it also has its fair share of history, with several buildings dating back to the 17th century – it’s particularly charming at Christmas time when the village Christmas lights go up.

Brownsea Island is the largest of the islands in Poole Harbour, on the south coast of England. It has a rich history that includes being the birthplace of the Scout movement and home to rare red squirrels.

In addition to its fascinating past, Brownsea Island also boasts a large variety of wildlife to explore. The island is home to a large number of bird species including larks, avocets, cuckoos, and oystercatchers. Visitors can also enjoy seeing red squirrels, fallow deer, and other animals.

Visitors can stay at the youth hostel or book a campsite on the island. Those interested in learning about Boy Scouts will want to visit the Brownsea Castle Cafe for some tasty treats and an educational display about Baden-Powell’s first camp on Brownsea Island.

Portland Bill Lighthouse is a prominent landmark in the area and was built centuries ago. It stands on the southern tip of Portland, the Isle of Portland, which is a peninsula off the mainland of England.

Portland Bill Lighthouse is located along the South West Coast Path and is a popular tourist attraction.

What is Dorset most famous for?

There are plenty of reasons to visit Dorset. From its world-famous Jurassic Coast to the charming market towns and villages, you are never far from something to do.

There is so much to see and do in Dorset, but what is it actually famous for? One thing it is famous for is the county being home to the Jurassic Coast. This is a World Heritage Site and covers 95 miles of coastline from Exmouth in East Devon to Studland Bay in Dorset. It is known for its geological heritage and for its geomorphological importance.

Another thing that Dorset is famous for is Thomas Hardy, an English novelist, and poet. The house where he was born is now a museum. The museum includes Thomas Hardy’s bedroom, his father’s workshop, his study, his kitchen, and his dining room. There are also displays about Hardy’s novels and poems.